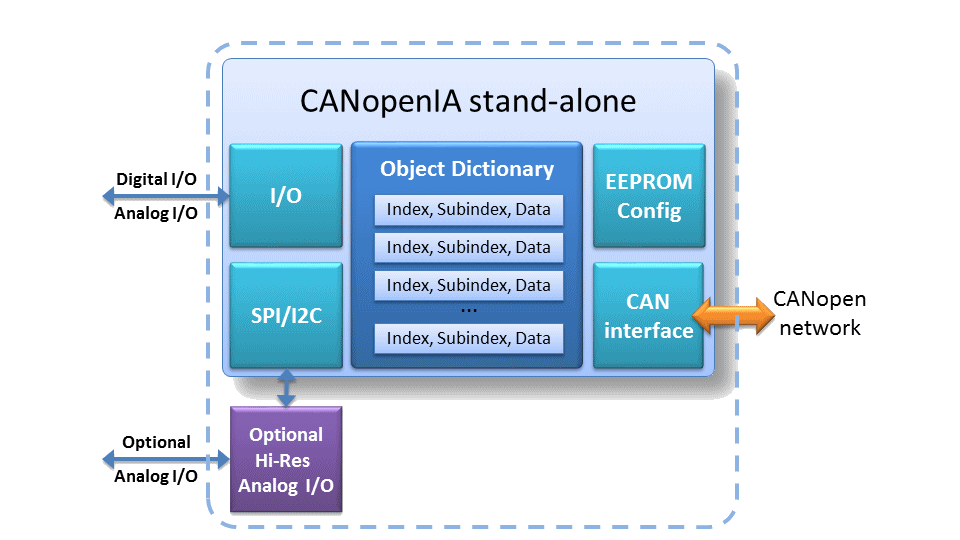 The block diagram above shows the components of a CANopenIA stand-alone system. Digital and analog inputs and outputs are provided as they are available in the specific CANopenIA hardware (microcontroller used). Optional high-resolution analog components might be available via SPI or I2C interface. How the process and configuration data is stored in the process image is determined by the setup information stored in the EEPROM or other non-volatile memory available in the CANopenIA device. The setup information also determines how the process data is made available via CANopen SDOs and PDOs (Service Data Objects and Process Data Objects).

When designing a device with a CANopenIA stand-alone solution, one can focus on providing the specific digital and analog circuits for inputs and outputs as all CANopen aspects are completely handled by the CANopenIA device.

The stand-alone mode of CANopenIA is used for direct CANopen connected input / output devices such as sensors, switches and encoders.

The coprocessor mode of CANopenIA is used to give a host controller access to CANopen without the burden to fulfil all communication requirements itself.